As drone technology continues to evolve, it will be important to watch IBM.
18148
post-template-default,single,single-post,postid-18148,single-format-standard,theme-bridge,woocommerce-no-js,ajax_fade,page_not_loaded,,qode-title-hidden,side_area_uncovered_from_content,qode-content-sidebar-responsive,columns-4,qode-theme-ver-13.8,qode-theme-bridge,wpb-js-composer js-comp-ver-5.7,vc_responsive

23 May Could IBM be getting into the drone race?

Technology has advanced so much over the centuries the sky is no longer the limit. Planes and rockets are modern marvels that continue to advance over time. What if organizations could use similar tools for their own needs? Drones have emerged as the must-have gadget within the past few years. While these machines were mostly used among hobbyists, companies are gradually starting to realize the potential that drones could have for business uses.

IBM, in particular, has sought a number of patents over the past year for drone advancements. IBM’s license requests position it as a potential player and innovator within the drone race. As drone technology continues to evolve, it will be important to watch IBM’s roles and patents for these machines.

Package delivery has traditionally been done through the use of boats, planes, trucks and carriers. All of these transportation methods take up a considerable amount of resources and maintenance to run properly, not to mention the time restrictions associated with delivery capabilities from a warehouse to its final destination. However, standard shipping options are no longer quick enough for modern buyers. Amazon pushed for two-day shipping for its Prime users and even offers two-hour or same day delivery in some locations. This speed has affected consumer expectations and placed pressure on businesses to perform. 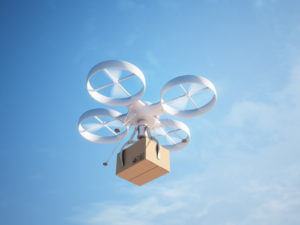 Drones could one day hand off packages mid-air.

Drones are becoming a potential answer to streamlining and automating package delivery for a number of organizations. Amazon has already experimented with using drones to fly a package to a buyer. Domino’s has also used drones to drop a pizza from the sky and parachutes to guide it to its destination. UPS ran a trial with drones carrying packages from a truck the buyer, while the truck was still in motion. A Nevada-based drone consortium even recently set a record for long-distance drone delivery, with the machine flying 97 miles carrying a 4-pound package, GeekWire reported. All of these tests have made progress in the technology and show what it can do in the future.

IBM is jumping into the mix to make up for drone limitations such as battery life, control distance capabilities and risk of theft. According to New Atlas, IBM’s newest patent outlines how delivery drones might make mid-air hand-offs to give drones greater range, make shipping networks easier to manage and prevent parcels from being stolen. With cloud-based control systems, these machines can operate autonomously, changing the way that businesses operate forever.

Watching over your furry loved ones

For any pet owner, it can be difficult to be away from your furry baby, especially while at work. IBM filed for a patent application for a drone that could act as a dog-sitter and trainer that could feed, train and prevent pets from tearing up the house, Fortune reported. Rather than a static camera, the drone would have sensors and tools like a microphone and temperature sensor. The drone would be able to detect when the pet is getting too cold, barking or walking into off-limits areas. If the drone detects unusual activity, it could trigger a training activity or issue a command. The drone could interact with other smart devices to let the pet outside or adjust the temperature.

“The drone would be able to learn about surfaces that will have more contamination.”

Medical professionals spend an enormous amount of time sanitizing equipment, treatment areas and themselves to prevent the spread of diseases. In 2012, Connecticut handled 914 cases of MRSA, inspiring one IBM engineer to patent a drone-based microbial analysis system in 2016. According to Engineering.com, the drone would be built with the cognitive ability to learn about surfaces that will have more contamination and which microbes grow easier on certain surfaces. This type of information will help the machine make decisions for cleaning priorities and frequency. The patent could also help organizations monitor food supplies across the chain for contamination in the future.

IBM is exploring drone technology that could change how organizations operate and improve safety within a number of industries. The company recently made a deal with Aerialtronics to bring IBM’s visual recognition APIs and Watson cognitive computing into unmanned aircraft systems. PCWorld noted that the first market for this technology will be cell tower maintenance. Drones can easily gain a 360-degree view of the tower without putting humans in danger, analyze images and report any problems.

Drone technology will enhance human capabilities while also keeping people out of harm’s way. IBM noted that with visual recognition, drones can be used by firefighters to immediately see where hotspots are in a forest fire. Teams can also use this technology to look for heat signatures in search and rescue efforts. Drone solutions are still in the early stages, but the potential for these machines is growing.